It’s Bridget Bell and I’m too excited to keep this one under wraps.

I know Stewart Parris from TAFE. He was an Auto Body Lecturer while I was studying Light Vehicle Automotive.

If you don’t know Stew, you’re probably familiar with his work regardless. I asked him to explain his passion for paint and he summed it up quite simply as a passion for art. He left school early in a familiar story; his Dad told him he was not permitted to leave school unless he had an Apprenticeship or a job to go to.

He lucked out on getting an Apprenticeship sign-writing, so he started a small hustle painting sale signs on cars in car yards, Santa on shop windows at Christmas time and the like. Remember how they used to hire sign-writers to hand paint the price, ‘auto’ and ‘1 lady owner’ in bold letters on the windscreens? Anyway, that’s how Stu eventually got an Apprenticeship while pin-striping an Escort.

Stew’s Dad raced Speedway for 25 years so he well and truly grew up in a motorsport family. Stu was also a New Zealand Drag Racing Champion in the late 90s running a ’27T Altered, then moved onto hot rodding once the family started coming along. Building many cars including Toranas and a ’38 Chevy Coupe before starting “THE 55”. Stewart wanted a multipurpose car that could be shown initially but then be used for weekend cruising as well as drag racing and club days at Carco Raceway, a true Swiss-Army-knife of a car.

I digress, Stewart’s work is exceptional, with a flare for 60’s paint. He freehand paints, pinstripes, airbrushes and can wield a paint can like nobody’s business. You’ll remember some of his work from previous Hotrod Shows, most notably Ben Forster’s Lincoln V12 Flathead-powered hot rod “COUPSTER”, a model T coupe with the roof cut off to look like a roadster, and “THE ZEITGEIST KILLER” trike. Those paint jobs, that was Stew. Now you’re caught up on the standard of work Stewart is capable of, the mind wanders to what would he build for himself? 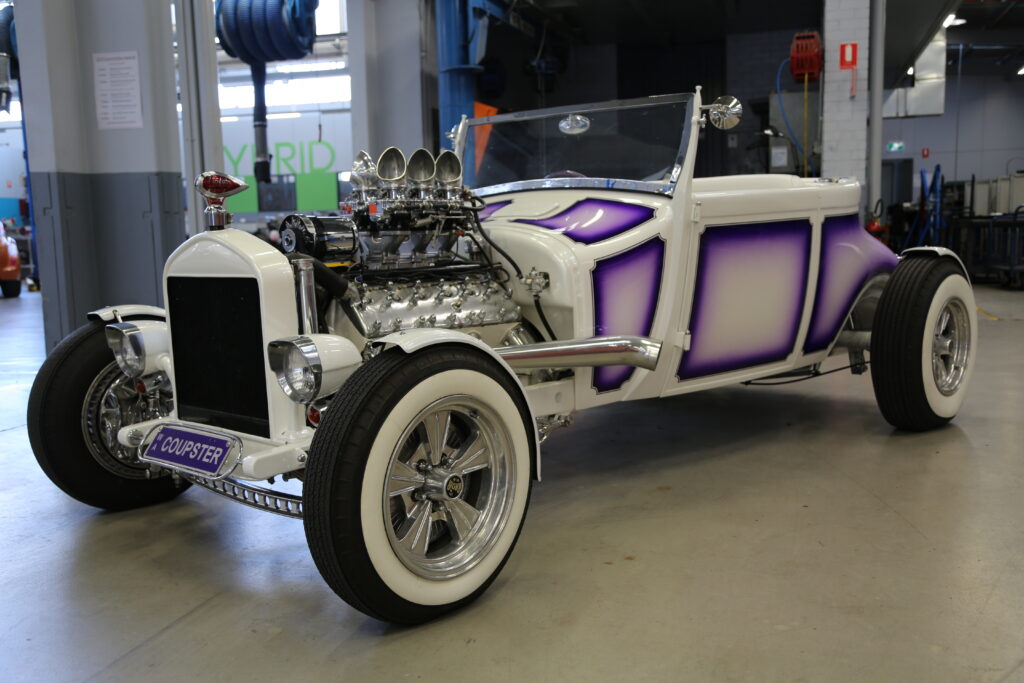 A few months ago Stew slid into my DMs with some unsolicited car pics with the accompanying message: “Keep it to yourself please”.

Full disclosure: I am no good at keeping a secret viewers. If you send me pictures, there is a good chance they’re going to end up on the internet.

Where do you start talking about a car that has had 13 years of effort and around 5000 man-hours channelled into it? As I stood in Stewart’s back shed looking at the pristine, shiny hunk of metal in the afternoon sun, I stupidly asked him “what will the purists think?” to which he replied “Chris Bitmead was one of the first people I spoke to when I started building it. It was right after he built “XBOSS” and he said to me ‘I can tell you right now, whatever you’re doing, just build the car you want to build’ he said, ‘don’t listen to anyone’.” 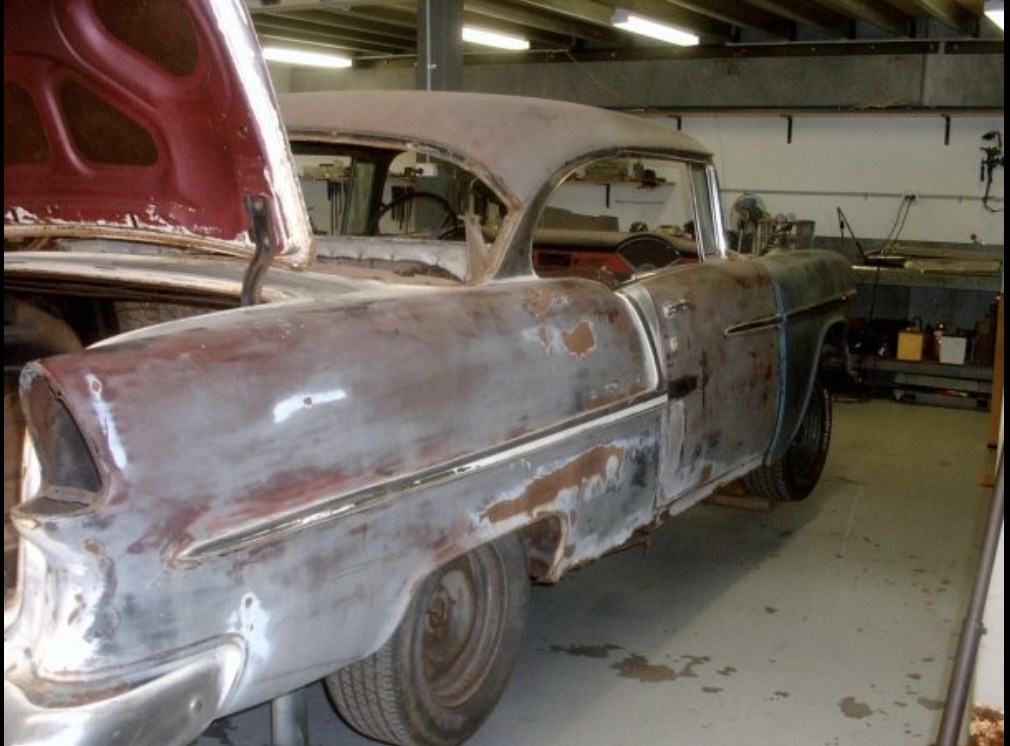 So we’ll start with the skeleton and flesh out the details as we go. Let’s start with the Art Morrison chassis. Stew had to weigh up between importing a fully engineered chassis from the US or making good the tired stock variant the car came with.

The ‘cost:effort’ matrix did not take long to decipher.

Initially purchased through Danchuck and eventually dealing with the late Chris Morrison and Art as well. The chassis was carefully packed into a container and made its way from WA USA to WA Australia. Then it was time to align the weary old body onto its new frame. A lot of the work on the rust repairs had been started by John at Fantasy Customs for the previous owner; the bottom of the far side door and the upper and lower sills. Leaving Stew to remediate parts of the floor pan, the ‘A’ pillars behind the front guard and beaver (or ‘rear slam panel’ if you’re playing from the US). Stew judiciously utilised jobber panels to his advantage just to get it to the stage where he could start the body modifications. 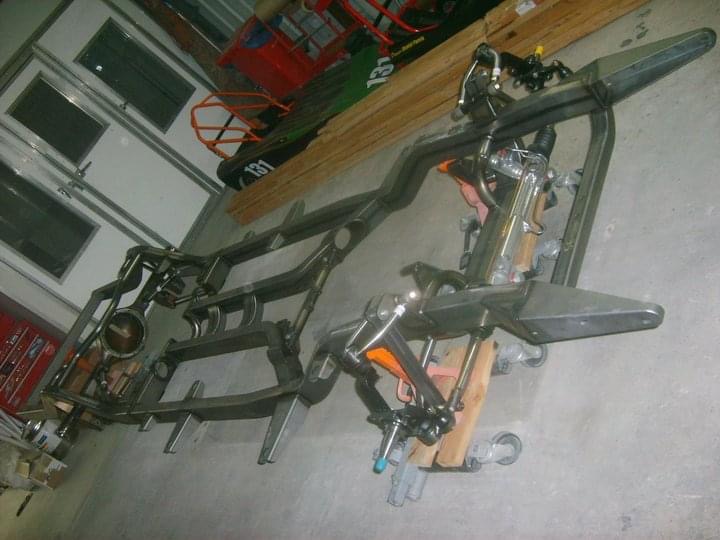 The next job was the conversion to right hand drive. When Stewart was initially undergoing the engineering research, he was led to believe the car required converting to right hand drive because of the aftermarket chassis, to conform to the Individually Constructed Vehicle (ICV) regulations. The conversion was performed with only the lower section of the front firewall needing modifying owing to the Bel Air’s mirrored dash.

It was only when Denham from Armadale Transport inspected the vehicle and identified that as the original VIN was still attached to the body it didn’t need to comply with ICV he informed Stew he could convert it back to left-hand drive if he wanted to.

Let us move onto the body modifications. Stewart, being a tech savvy kinda guy performed his R&D for scaling up the wheel arch dimensions by printing a photo and cutting it up to see how it would fit the generously proportioned 18″x12″ wheels with 345 rear boots. Despite the rear wheel housings being stretched, rolled, widened and heightened in all directions, the proportions and body lines are retained, even slimmer owing to the removal of the ballooning of the front guards and doors with the back guard fattened up to redistribute the bulk. Another easily overlooked detail is the custom fabricated wheel wells with the void behind the tyres normally attributed to the tri-five Chevys being neatly filled in the rear and married to the front chassis rails for a streamlined engine bay.

He tells me “it’s been my plan all along,  everyone’s going on about Pro-Tourers and Restomods now, this is basically a cross between the two. I could quite comfortably jump in this and drive to Victoria and be comfortable as, all the way.”

A snazzy fuel door delete, new tech back when first purchased at the beginning of the build and discrete relocate to the actuated rear tail light, cleans up the body lines. With a tricky twist added to the chrome finishes. I’m not giving it away, you’ll have to pick it yourself. Let me know at the Show if you figure it out 😜.

Plenty more to see at the front too, the bonnet swage has been set to with a brickies bolster chisel and hammer to sharpen and define. When pressed for details, Stew admitted that the hammer was not used suggestively for the task. Then the front and rear splash pan and bumpers have been shrunk fit closer together for a nice snug fit.

Speaking of gaps, 1950’s factory pressed panel gaps have been retained just being respectfully tweaked to run a bit more parallel. The real tricky and easy to miss detail is the vestibule panel.

Lets take a look at the interior now? 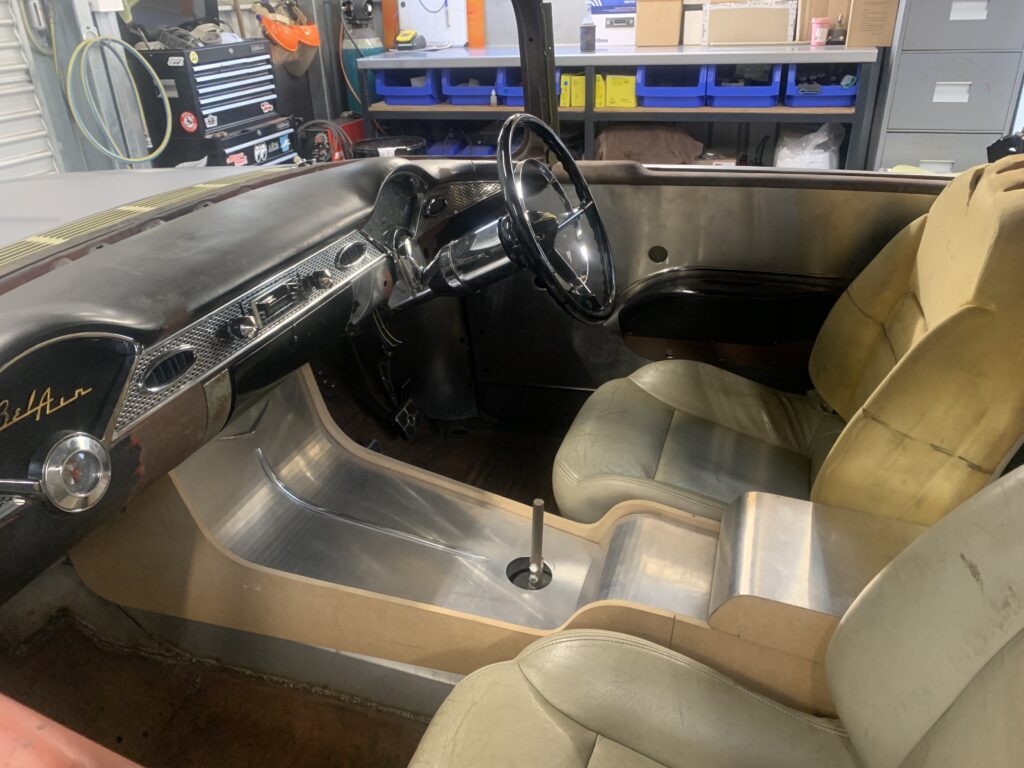 The interior was intended to look classy, taking design cues from high end Rolls and Bentley’s from the same era.

The dash is respectfully appointed with factory trims, a discrete Vintage Air A/C mini unit tucked under dash and a digital radio with all the modern integration is disguised behind an antiquated facade, illuminating with a digital display when powered. Brake booster, clutch master and reservoir are also discretely tucked under the plenum attached to the reinforced firewall. Yes, clutch. This car is a tricky three-pedal variant. 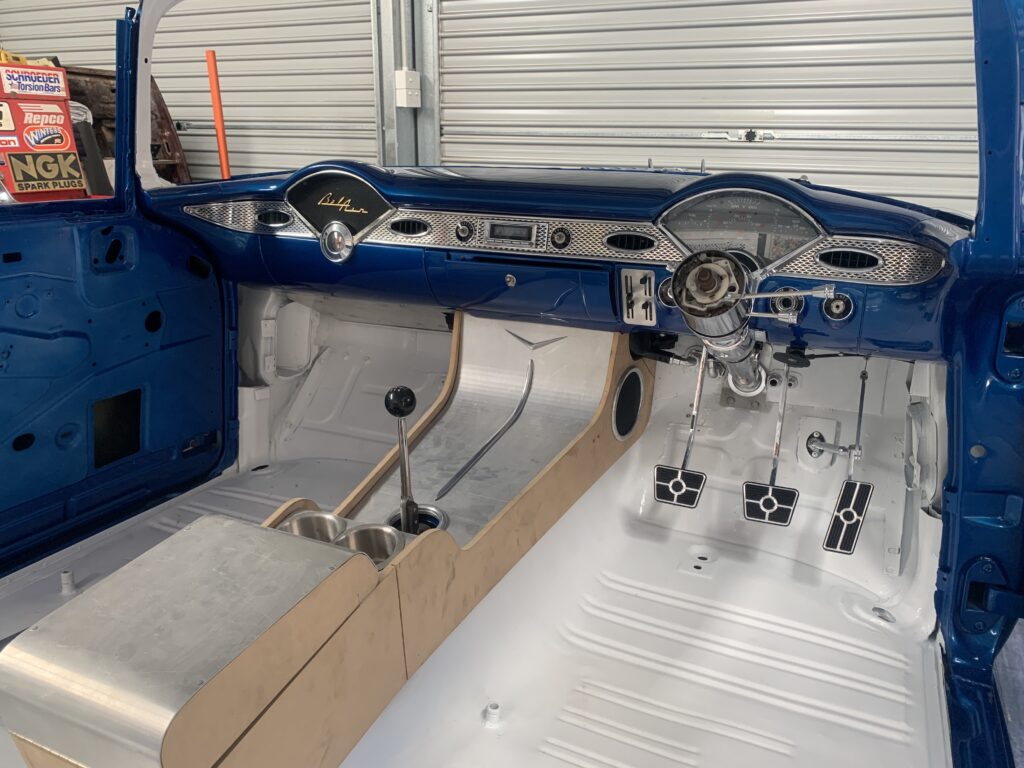 Onto Paint. How much effort would you assume a trade qualified auto-body lecturer would put into panel and paint for his own car? “Thousands of hours” was the response when squeezed for an answer.

Blasting, solvent washing, acid coating, priming, block sanding, filling, sanding, more priming, sanded back and then final prime to get things really flat. This proceeded the guide layer of PPG Paints, chosen for ease of application and repeatability, given it’s future as a road-going operation. More sanding was followed by 3 coats of solid white base coat, then 3 of the crisp Mazda Snow White pearl. Followed by 3 coats of clear.

The white looked amazing, but the Bel Air insists on two-tone paint. PPG Vibrance Blue Pearl with green, red and blue metal flake was applied in a process which, when described by Stewart and if taken out of context, sounds like someone describing salt-bae’s seasoning technique, flake applied onto the wet clear dried a certain percentage to make the flake stand up and catch the light from all angles. Not happy with the masked edges of the two tone, once again it was sanded back and flow coated with another 3 coats of the PPG Vibrance VCC580 custom clear to correct. The result of $20G (trade rate) and 800 hours alone in paint. 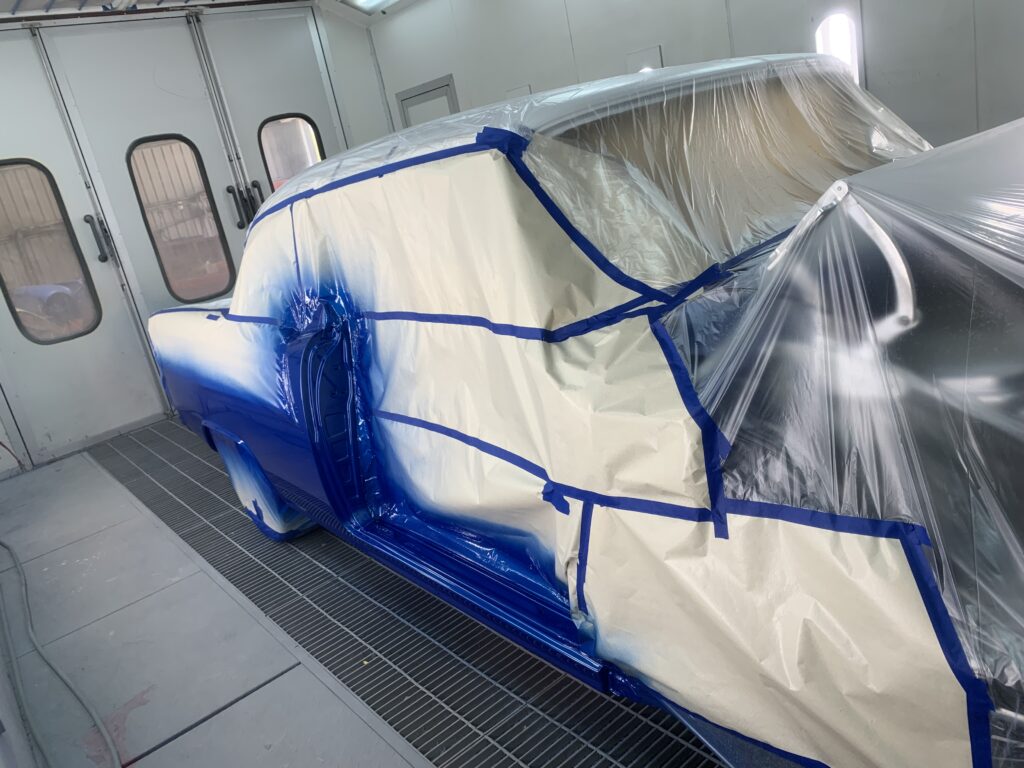 Stew took three months of long service leave to paint the body interior, underbody and engine bay. And because of the detailed and colour matched underbody it means that this ‘built to drive’ car is being judged at its debut as an Elite Show Car at The HotRod and Street Machine Spectacular even with the stone guarded wheel wells.

Off topic: Did you know different hardeners are rated by effective time, not finished hardness? Hardness is due to the chemical reaction and is not related to speed of drying. And baking just makes the drying process quicker, not harder? Stu dispelled some spray-painting myths circulated to increase the popularity of ovens from a decade or so ago for me.

Another three sessions of sanding, and probably a fourth with progressively smoother sanding medium will be administered before Johnny Ielati of Benzenes Detailing is trusted for the final once-over before show day in a little under two weeks. 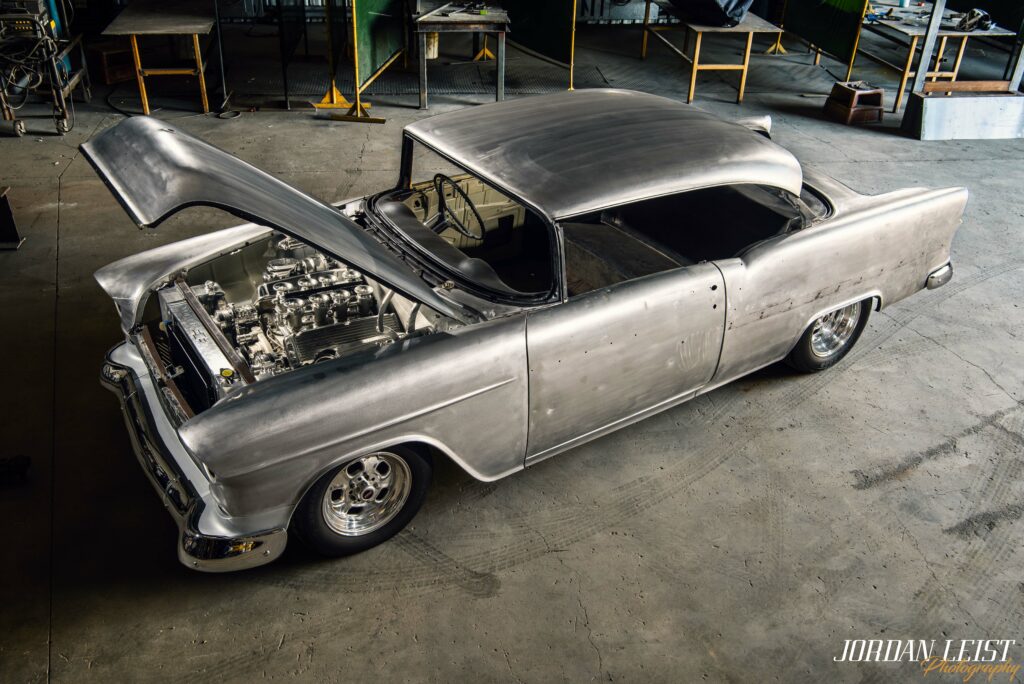 “THE 55” will be debuted at The Hot Rod and Street Machine Spectacular, held Saturday 26th and Sunday 27th of November 2022 at Claremont Exhibition Centre. The Show is also a qualifying round for Meguiar’s Superstars; to see the best cars in the country compete for the Grand Master prize in Melbourne at MotorEx 2023.