It’s Bridget Bell and sometimes I am hyper aware that this may be the best job in the world.

This week sees me up in beautiful Parkerville, enjoying the smell of Eucalyptus trees, native bird song and gorgeous burnt orange hued sunset drives away from suburbia. We pull in the drive to a modest 70’s red brick house, set back from a road lined by 50+ year old trees. The air is fresh and crisp after a rare sunny winters day in Perth.

We are greeted warmly by Steven McQueen, SupermotoWA club president and all round nice guy. This man cannot attend any motorsport event, at any track in Western Australia without being bombarded by goodwill and roped into helping someone out.

The mechanic and all round motorsport aficionado has done a bit of everything, Speedway, Supermoto, burnout competitions with his yellow ute with mismatched tray BOXGAP, the man steers a Postie bike like nobody’s business. And that is how I received my invitation up the hill for dinner.

I hand over a box of Krispy Kremes which Steve presents to Katie as we arrive on the the veranda. She’s bringing the cat in from her cat-run, an impressive structure that makes 90% of chooks look like they’re living below the poverty line. She snatches the Krispy Kremes and promptly locks us all outside in the rapidly cooling conditions. I immediately like her.

When we are finally allowed into the house I find myself in a house that while ageing has taken a beating. Steven explains that they’re spent the last 5 months replacing walls, roof headers and a Jarrah floor that had been exposed to water and subsequent white ant damage. The house built into the tough bedrock of the rolling hills. The photos show a gutted interior with no floor, suspended 2 meters above ground level on one side of the spacious lounge room, 2 foot on the other. I am completely amazed at this point how these two people, with help from a few mates and family have managed to re-plumb, rewire, move walls and pour a new foundation to create a perfectly liveable space in 5 months, all while both carried injuries and worked.

Katie and I squirrelled ourselves away in the kitchen, and she sets to whipping up a Mexican fiesta.

Without delay, Katie launches into the hysterical tale of her first foray into motorsport;

“The service was performed the day before and the car broke down on the way to Collie, it’d overheated. Another competitor pulled over and gave us some water which got us to the petrol station where we waited while Dad was on the phone to the RAC. We waited for a further 4 hours for Roadside assistance. “We got back to Lansdale with the patches performed on the radiator on side of the road.” 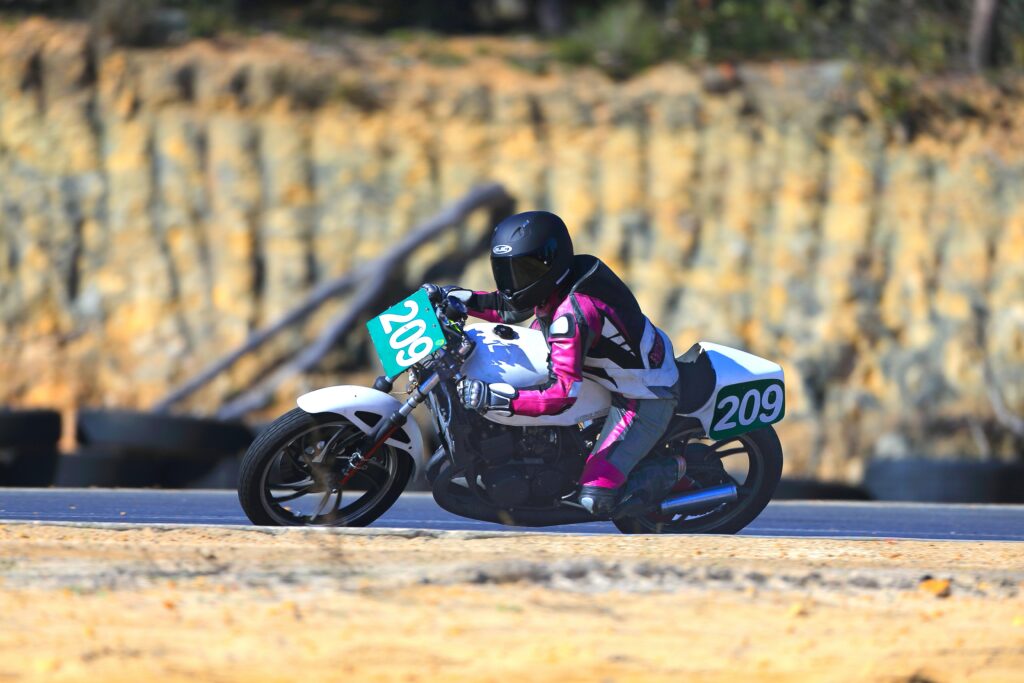 Was that it then, your first attempt to go motorcycle racing? Did you ever get there in the end and what about the bike?

“The hire bike was supplied by the Coach, so Dad and I headed off south again in Mum’s Mazda 3. We arrived at the track at 10.30pm, lock out was 10pm. “We didn’t realise, the gate was only dummy locked, so Dad and I trekked off to spend the night at Stockton Lake. At night with only the Mazda’s headlights, we didn’t see the drop off from the road to access the clearing we spotted, about a foot in depth. The Mazda found it though.

“After the 11 hour drive to Collie and the unplanned camping adventure, we woke to a frosty morning and a cold breakfast of cereal and milk from the esky, before heading off.

“We helped set up when we got to the track. I was full of energy and enthusiasm and even Dad was in good spirits after a good night sleep in the swags rolled out next to the car.”

What an adventure, and that was just arriving at the track. What was your first day of riding like then?

“I had a couple rides on the Saturday with the Coach, I’d never really been on a bike before. I couldn’t turn, I couldn’t stop, I couldn’t even go. The whole day was a whirlwind and was probably just Coach telling me all the things I was doing wrong ‘this is the accelerator, when you twist it, you go’.

The only time I’d been on a bike was in a carpark at McCracken house. I’m sure that Coach was thinking ‘what have I gotten myself into?’”

How old were you?

“About six months after I started, ten years ago last Wednesday, my brother started swinging on a sidecar. Dad and David wanted to have some fun and get involved too, so they started racing Historics too. My brother still does it now.”

How many girls can say they got their Dad and brother into competitive motorcycle racing? It’s so cool Katie. What has it been like racing with them?

“I remember one time my Dad got on my bike, there was a class for parents on junior bikes and my Dad crashed my bike! And broke his leg. I had to ride it in the next race that same day.
If required the track Ambulance will attend a crash, Dad had collected the inside ripple strip ricochetting and shot off in turn three colliding with tyre wall on the exit. The tyre wall was a lot closer to the track ten years ago. All we could see from pit bay was Dad holding himself prone to the tyre wall while they finished the race. He was upright, so no one was aware at the time that Dad couldn’t stand up by himself.

“My bike was ruined, levers, handle bars and fibreglass fairings all decimated. It wouldn’t have passed scruitneering before the race. Luckily, while Dad was getting sorted by the pit medics, I was able to borrow my Coach’s sons bike. He is now an accomplished ASBK and BSB rider, whom won a wildcard to race Moto 3 a couple of years back. I am one of very few people that have had the chance to race his 150cc on track. I still lost the race, but in my head I was thinking ‘I can win, I’ll do it for you Dad’.” 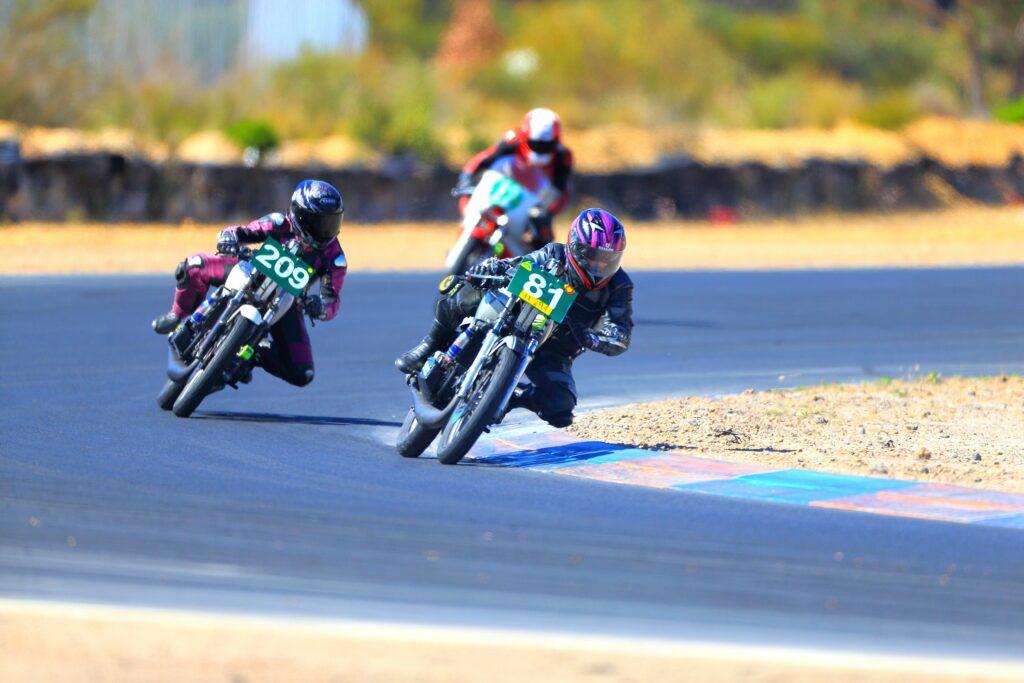 Where did you go after juniors Katie, what was next?

“After juniors, I was offered a bike to ride in GP125cc at Motorcycle Racing Club (MCRC). It was a completely different type of bike, so much more work and I completely sucked at that too. I really did, it was fun and I did that for two years before I sold it.
“I was riding my Yamaha RD at the same time in seniors with the Historic Competition Motorcycle Club (HCMC), and I’ve been riding with them for the last 8 years. I’ve won 2 state championships.”
Steve lurches from his chair and grabs a handful of Katie’s medallions from a nearby trophy cabinet, shaking them in my direction like an American college cheerleader with an oversized pom pom.
“Silver 2021, second 2018, most improved 2019 perpetual trophy, junior sportsmanship twice, 2012 and 2013, first place period 5 250cc light weight my brother got second. Dad sometimes comes third. We all race the same type of bikes, so it’s awesome.”

How did you meet Steven?

“The second time I ever met Steven he was officiating as clerk of course, they announced that they needed a flag marshalI. Steve looked directly at my brother, David, whom I was stood next to. Steve was the person that introduced David to Speedway Sidecars and racing Postie bikes. So I ended up with a flag in my hands on the in-field at my first ever Speedway event as my brother was swinging on a side-car.”

Who are your biggest supporters?

“I’m really fortunate that Dad has supported me and my brother with our racing.”

You’re really big on paying it forward aren’t you?

“After all of the years of racing, Steve and I spend as much energy as we can officiating and giving back to both of the clubs, the HCMC and Supermoto WA.

“I’m an accredited coach, working with new riders and juniors, we have an amazing field of 5 female juniors which is unheard of. There are about 15 female riders in HCMC of the 170 racers that attend a meet on average.

“I am also a Level 3 Race Secretary, which means I process the sign-on and official documents behind the scenes for the officials so they can perform their tasks on race day. This is my second year on the Committee at Supermoto Club of Western Australia and was on the committee for the HCMC in 2019 and 2020.

“I do it because I love helping people and I do as much as I can because I want to give back to the people that have helped me. Watching the juniors getting faster and faster and their confidence growing, watching them set their personal bests is just amazing.”