If in 2021 you had have asked me how the 2022 Saloon Cars AU/VT state championship in Western Australia was going to look with the departure of Brock Boley, I’m sure I would said something along the lines of “another clean sweep by Grant Johnson, Harvey and Martin battling it out for second and third.” 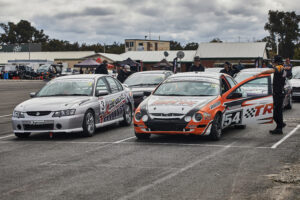 Returning to the current standings, Mason Harvey is currently 11 points ahead of Matt Martin who is 7 points ahead of Grant Johnson with Chase Hoy 14 behind Johnson giving a spread of just 32 points in the top four meaning with just two race meets left for the year, all four will be wanting to ensure mechanical and driver reliability.

Looking back across all rounds this year, mechanical failures have played a huge role in results this year. For example at the Wanneroo June Race Meet, Johnson only scored 13 points after mechanical failures. His usual purple beast replaced by his dads orange commodore, before being replaced again with a VY Commodore built by the Team Purple Father Son duo of Matt and Brad Martin in the lead up to the August race meet in record time, but still with a few gremlins before Johnson ended up slotting it into fourth and then second.

Another potential contendor, Robert Marcon hasn’t attended the Collie rounds and potentially could have shaken up the points at the top even more. 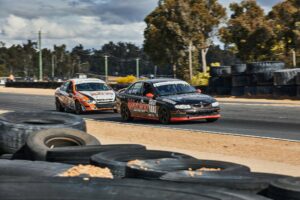 At the recent Collie round the exciting battle for first in each race between Chase Hoy and Mason Harvey lasted for the first few laps of each round before the quicker Harvey finally found a way past Hoy to take the lead. Hoy opting in the first two races to turn the wick down a little to ensure he stayed ahead of Martin and not risk any mechanical failures. In the final race Johnson managed to pass Martin and finally Hoy before finishing up behind Harvey but after not securing any points in the first race, it was a rare non-Johnson podium at Collie.

After 7 rounds and the title run so close, who will come out on top after the final two rounds of racing at Wanneroo Raceway? The first round is on 18th September 2022 and the final is 5th November for some twighlight racing. Make sure you keep an eye out for time tables and more, but remember the main races are always after lunch!

Before we go, I have to mention Michael Koberstein who is currently a massive 186 points ahead of Matthew Jenkin in the EA/VN State Championship. The numbers in the EA/VN have been a bit low this year, but between work commitments, helping AU/VT competitors out and other reasons, the competitors are still out there supporting the category, just not on track. Hopefully next year they’ll all make a return!