Around the time this guy was 18 / 19, we used to sit around cafe strips in Fremantle or wander the streets of Northbridge to the loud “DOOFDOOFDOOF” music and drone of 35″ exhausts (ok 35″ is an exaggeration) attached to ratty Hyundai Excels’ doing “bog laps” of the area.

Flash forward, quite a few years, and now they are one of the biggest categories in Australian motorsport with prices for a well race prepped car beating out their original sale prices.

After torrential rain on the 1st day of the July Race Meet, everyone was hoping that the predicted 1mm of rain would be all that would fall on the Sunday and they probably got less than that, however the track was still declared wet for some early sessions as the previous day’s rain had truly soaked the track and the overnight rain didn’t help.

First up for the day eight Trans Am’s lined up for qualifying with West Australian Clinton Rayner put his Howe Chev Camero on pole with a time of 1:10.823 followed by Brett Niall and Peter Robinson from Queensland.

For their first race with a drying track, the times came tumbling down with Brad Boley (WA) finishing ahead of Jason Pryde (WA) and Brett Nial (WA). The three eastern states contenders Mark Crutcher (NSW), Peter Robinson (QLD) and Robert Leonard (QLD) filled out the next three spots. Brock Boley and Clinton Rayner would be the two DNFs for this race.

After starting at the back of the field following his DNF, Brock Boley (WA) threw in some blistering laps eventually setting a new lap record of 58.8850 which was faster than the previous record, also set by Brock, of 59.1784.

For the final race, Jason Pryde (WA) would win the race with Brett Niall (WA) behind and Peter Robinson (QLD) in third.

The Formula Vee WA competitors were treated to much better weather than their Formula Ford counterparts had on Saturday and the racing they put on was close as always.

David Caisley topped the 1600 qualifying charts followed by Mackenzie Matthews, Jason Fowler, Franz Esterbauer and David Campbell on a declared wet track. The first of the 1200 class was Myles Lockett.

Race 1 was raced on a drying track with Franz Esterbauer finishing ahead of David Caisley and Jason Fowler in the 1600s and Myles Lockett, Brett Scarey and Callum Lamont the top three for the 1200s.

After the lunch break David Caisley put in a convincing win in the 1600s ahead of Esterbauer and Matthews finishing almost 8 seconds clear of his rivals. In the 1200s Lockett and Lamont were the top two with Bruce Allen bringing up the final step. Connor Welsh started to creep up the standings finishing 4th.

For the final Formula Vee race, Caisley again outclassed the field but the margins were much tighter with Matthews and Esterbauer taking up the minor placings. Meanwhile Myles Lockett wrapped up first place in the 1200s and Connor Welsh took his first podium placing since joining the category. Allan Yeo rounded out the top three.

Moving back into the tin tops, the Saloon Car (think Holden v Ford) category was suffering a perfect storm of conditions with fairly low numbers, by their own standards, out on track with just 10 runners in the Pro class and 5 in the Pro-Am class.

Grant Johnson would be the surprise of the day in terms of his results as his car suffered from technical faults, however in the final race Grant would finally get it all together and finish first.

However during qualifying, Mason Harvey would put his car on pole with Matt Martin and Chase Hoy not far behind with just 0.4801 seconds separating 1st and 3rd. In the pro-am class, Michael Koberstein poled it with Reg Ralph and Craig Splatt behind.

Pro class race 1 results had Matt Martin finish first, Mason Harvey in second and Robert Marcon in third and Grant Johnson finishing at the back of the pack in 10th. Race 1 results for the Pro-Am class were “same same” with Koberstein 1st, Ralph 2nd and Splatt 3rd.

Race 2 results saw Martin again finish first with Marcon and Ciallella rounding out the top three with Chase Hoy knocking on the door in 4th again. Koberstein, RAlph and Splatt made it 2 from 2 with their results in the pro-am.

Race 3 and the pro-am class were yet again the same with Koberstein finishing ahead of Ralph and Splatt.

Grant Johnson found his feet in the final race of the day however he only finished 0.25 seconds ahead of Matt Martin and 2.2 seconds ahead of Chase Hoy. However Martin would take a trip to the stewards after the race and was handled a 30 second penalty which elevated Chase Hoy to 2nd and Robert Marcon for 3rd.

The Excel Cup WA crew were out in force with 17 cars and 34 drivers all vying for the bragging rights of winning the Enduro round. Early in the day they were all putting their best feet forward including Andrew Malkin who put his car within 0.6 seconds of the lap record in race 1.

For the Enduro the eventual winners Andrew Malkin and Harry Douglas would finish almost 10 seconds ahead of their nearest rivals. Ruano Stumpf and Cam Atkins unfortunately did not have the best of races with a retirement of the #50 Lyus Racing entry. 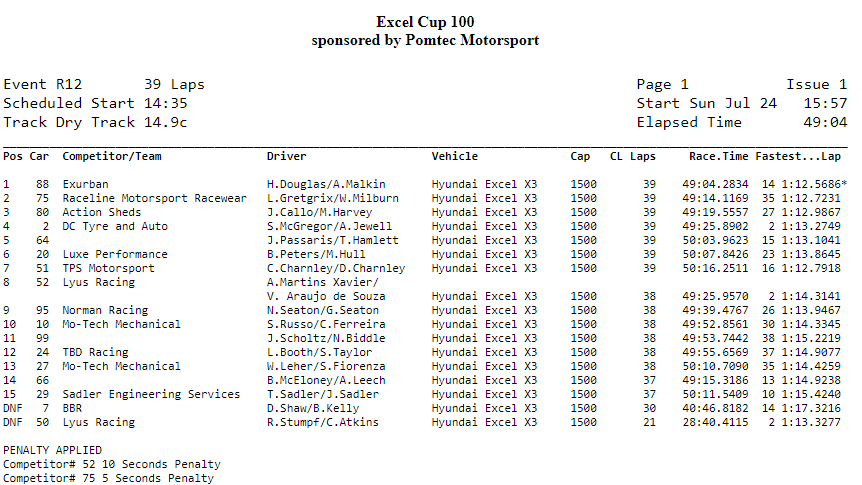 The next race meet is on Saturday and Sunday 17-18th September at Wanneroo Raceway.